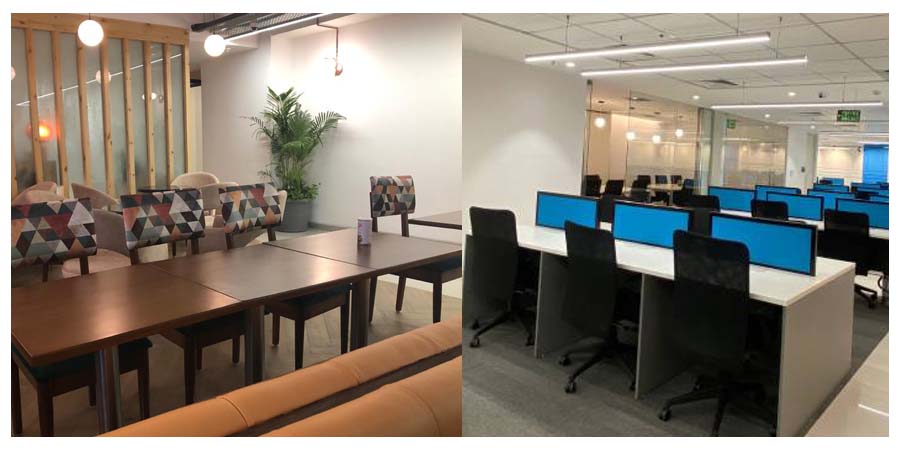 Coworking design is focused on encouraging collaboration and the convenience of sharing amenities. The interior follows a creative, modern and community inspired approach with floating or dedicated workstations. The meeting rooms and common areas are shared by several companies in the community.

While the managed offices are more conceptualized as compared to shared ones. It is exclusively designed as per the tenants’ requirements. The meeting rooms and common areas are also designed and used by the company that has hired the space.

Customization is another major differentiator between coworking spaces and managed offices in Delhi and every other city. The coworking spaces don’t offer a chance for major layout changes whereas managed spaces are empty spaces built from the scratch. It is built as per the client’s preference and their business identity. Coworking spaces come pre-built with all amenities that allow move-in from day 1.

The upfront costs for the managed offices are comparatively higher than the coworking setup as setup costs are included already. Managed offices demand a security deposit typically equivalent to the rent for 6 months. It also required adding on costs for the furnishings. The cost of coworking spaces in such cases is borne by the operator and you pay a comparatively lower price.

Shared office occupants might struggle to work in privacy as you will be accompanied by other professionals from different companies sharing the same premise. Not to forget the unnecessary chaos in the open surroundings, whereas the managed offices give absolute privacy to the tenant and are beneficial for people who deal with jobs that require privacy and confidentiality.

Coworking offices are move-in ready – once you have decided on the package, signed the contract, and fulfilled the payment obligations, you can start working out of the office. In contrast, the transition time is higher for companies moving into managed offices. After signing the contract, it might take 6-8 weeks before the office becomes ready for occupation.

Now that you are aware of the differences, decision making is going to be an easy task. Contact Avanta for managed office space in Delhi and NCR. We have managed offices and coworking spaces in Gurgaon and Delhi’s prime locations, so you can take a view of both and make an informed decision.